One of the important considerations of solar system productivity has been monitoring and managing the solar output in comparison to the load the system designed to power.

Most of the stigma around solar energy in Africa is usually due to poor operational management and performance related issues.

Often times, systems would be installed to power a rated load but due to changes in load and consumer habits, the useful life of the installed system may be reduced.

There’s an easy solution to this, and it’s called DATA.

Why do you need Data?

Data is raw information, and the basis of any informed decision made.

A simple example: when you make the decision to charge your phone, based on the data you see on your screen showing “battery low” at 10%.

With no data shown, your phone would probably run-down mid-call. If the data is incorrect, you’d be charging an already full battery, and most likely wasting your time and energy.

Now, apply that same principle of data to your newly installed solar system but only now, its more complex with measurement indices – you now have a lot more data to deal with – these indices are, the charging current, state of charge (SOC), Depth of Discharge (DOD), the solar production per day, loading of the system, consumption patterns, battery temperature, cranking amps of the battery, system ambient temperature, and a lot more.

Each of these parameters plays an important role in the performance of the system and its useful life as well.

Data is basically useless if nothing is done with it; you would just be showing a bunch of numbers in an excel sheet, but at InfraNergy, a team of dedicated professionals continually uses this data for performance evaluation and system correction.

At InfraNergy we are not just committed to providing high-performing systems but we are also committed to telling stories from the data collected from the system during operation in order to ensure optimum performance.

Why do I need to maximize my solar system?

Take for instance, one of our solar installations, SITE A: an industrial facility.

One might think that its consumption might be roughly equal throughout the weekdays, right? Here is when data comes in and begs to differ.

InfraNergy’s team takes consumption data from our robust monitoring platform and analyzes the time of day consumption patterns and timestamps.

Comparing recent data with data closer to the installation period we discovered that consumption differed greatly according to weekdays, with some days consuming almost twice as much energy as other days!

This might be done unknowingly, with the site having different departments that run different operations without giving a thought to its energy implications.

Or in another case the site might have a policy dictating days of remote work and on-site work hence, a lot more people come to work on some days than others.

Summary data visualization of the cycle count for the site.

The battery operates in cycles based on load and discharge time.

This may mean that between Thursday and Friday the battery does more cycles than on Mondays and Wednesdays.

With this data, the client can readjust their consumption patterns so that the system isn’t overworking on some days and fairly idle on other days.

We know that batteries simply last as long as their original equipment manufacturer (OEM) cycle counts (a cycle means the amount of time taken to charge and discharge), commonly, lithium-ion batteries being the more superior build, having over 6000 cycles while the lead-acid flooded or Gel type typically ranges from 2000-4000 cycles.

That is why it is so important to tell how long the battery would last.

Let’s have a look at another illustration,

Attempting to expand their operation, certain loads were added and thus the site began to run two cycles per day.

We looked closer at the data and discovered the change in cycles and could predict how long the system would last, therefore allowing us to act or advice appropriately.

With one cycle a day, the battery would last for up to 10 years.

However, with the 1.5 cycles per day been changed to two cycles, this change, seemingly small, could shorten the lifespan of the batteries from six years down to four years respectively, as seen in the short data viz below.

Following that, we then advised the client on proper steps in order to increase capacity without affecting the lifespan of the system.

InfraNergy prioritizes data-driven systems that help you monitor your consumption and efficiency.

With InfraNergy you can be assured that your system is at the top of our minds as we go the extra mile for a highly efficient solar system that offers great commercial value.

We are where Data analysis and Data-driven decisions meet Renewable energy to offer value preposition.

To get a free consultation and generate cost savings, get in touch via our contact form today. 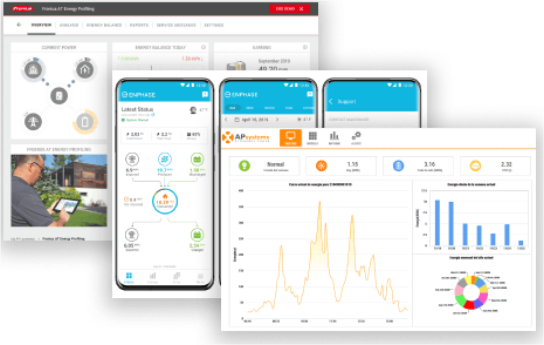